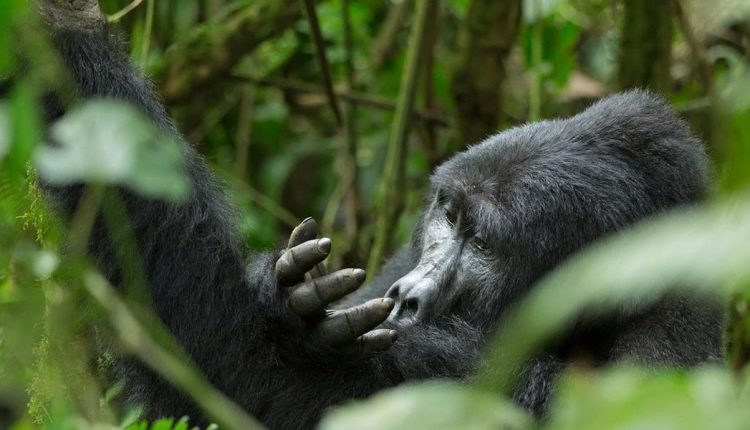 Virunga National Park is Democratic Republic of Congo’s top and popular destination to visit located in the Eastern wing popularly known for the shy endangered Mountain Gorillas in the mist, this Park is ranked to be the oldest National Park in Africa formerly called Albert National Park characterized with thick tropical rain forests, Savannah grasslands and Woodlands, Bamboo forests plus fertile Swampy areas.

Rugendo Family. This group has six individuals of gorillas including three Silver backs. It is led by Rugendo the father of Humba. It was habituated in 1989 and by 1997 the group had 18 individuals with two Silver backs (Rugendo and his son Humba).

When Humba split from his father in 1998, only 8 Individuals stayed with Rugendo and in the next few years, there was increase in the number of the Gorillas in this group because of the consecutive births that followed. In 1999, there were two births in the Rugendo group from the adult female Safi who gave birth to Katembo, and Neza also gave birth.

However, on 15th July 2001, the Rugendo group was caught up in clashes between the military and the Interahamwe militia groups and as a result Rugendo the Silver back was shot dead just 40 meters from the park boundary. In 2007, the group was attacked and 4 gorillas were shot dead including 3 adult females (Safari, Neza, and Mburanumwe) and the Senkwekwe who was the lead Silver back a successor of Rugendo.

Munyaga Family. The group is located in Bukima close to Goma with over 7 gorillas including 2 silver backs. It was the last gorilla group to be found by rangers in 2008. The family was led by Munyaga by then the Silver back and the dominant adult female is named Bilali. She was from the Rugendo group in 2004 and after she joined, she had two babies but they both died in infancy.

At the same time, Munyaga also disappeared and as of now, the group is led by Silver back Mawazo who lived with Buhanga until 1997, then joined Karatega, then went back to Buhanga in 1998 and then, a month later, he easily joined the Munyaga Family.

Kabirizi Family. It is composed of 34 gorillas including 2 Silver backs. This group is found in Bukima sector which is close to Goma being proudly led by Kabirizi Silver back. The group derived its name from an ICCN Director who died in a traffic accident in the late 1990s. Previously, the silver back Kabirizi was not a habituated gorilla family and instead a wild gorilla. Later in 1998, he was named the head of his family after habituation. Formerly, this group was known as Ndungutse family because by then it was led by Ndungutse Silver back who was assassinated in 1997 after being caught in crossfire between the DR Congo army and Rwandan rebels near the Bukima patrol post.

Humba Family. This Humba group is led by Humba silver back and is also found in Bukima sector of the park close to Goma. It is composed of 16 Gorillas including 2 Silver backs. This is so far the calmest habituated Gorilla group where by many tourists and ranger like to track it. Humba is a brother to Senkwekwe Silver back who was executed on 22nd July 2007 by unidentified gun men. Humba split from Rugendo (His father) in 1998 and since he has been a Silver back till now.

Mapuwa Family. Mapuwa group is composed of 15 individuals of gorillas with 1 silver back and is found in Jomba near Bunagana (Congo-Uganda border). The group is led by a silver back named Mapuwa and has acquired and protected his family by all means even in violent struggle. He was a son of Rugendo and left his father’s camp in 1998 and started his own family.

When he left, he took along 2 adult females named Jicho and Mafaze. Continuously, he fought wars to acquire more females like in 2002; he fought with Pili – Pili and acquired 3 individuals from him and leaving him solitary. Consecutive births have occurred until now that the family has 15 individuals.

Lulengo Family. The group has 6 gorillas and 1 silver back. It is led by Lulengo himself and is found in Jomba near Bunagana (Congo-Uganda border). Lulengo was born into the Rugabo Family which was the first mountain gorilla family in the Mikeno Sector to be habituated. Formerly the group was called ‘Musekura’ but the Rangers changed his name to Lulengo in the memory of the Technical Director of Virunga National Park who was killed by a land mine. His father Rugabo also died violently when he was shot by poachers during the Great Lakes Refugee Crisis in 1994. After his death, the family was left in the hands of his sons Lulengo (Black backs), Pili – Pili, Mareru and Nvuyekure (Juvenile).