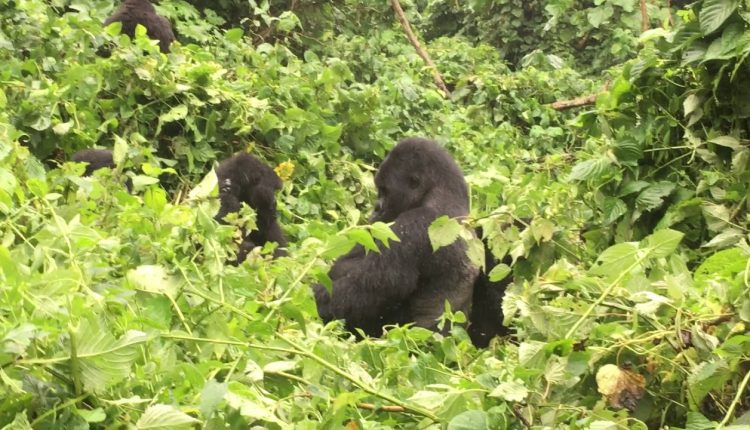 Democratic Republic of Congo is where Virunga National Park is found, and the country is one of the only three countries (Democratic Republic of Congo, Uganda and Rwanda) habiting the rare endangered mountain gorillas. All travelers visiting this park experience the gorilla trekking tours that are led by experienced park guides/rangers who will help the trekkers to identify gorillas easily. The park is a home to eight (8) habituated gorilla families, which include:

Mapuwa gorilla family lives in Jomba near Bunagana, and the family was named after the silver Back Mapuwa. This silver Back has acquired power which he has used to protect his family by all means through violence struggles. His son is called Rugendo who is also a leader in Rugendo group, named after him. Rugendo left his father’s group in the 1998 to start his own family. He went with 2 adult females named: Mafaze and Jicho. Due to his continuous fights, the silver Back Mapuwa has got more members from other groups.

Pilipili, the strongest and well-known silver Back in Virunga was stripped of all his members in 2002, leaving him alone to protect the family. In Addition, Mapuwa has been grabbing individuals from other groups however his group members have given birth hence leading to the increase of members in the family. Currently the silver Back Mvuyekure is the dominant Silver Back in the group leading a total of 22 gorilla-individuals in Mapuwa group.

Humba gorilla family is found in the Bukima sector of the Park, and as of current it is the calmest habituated gorilla family in Democratic Republic of Congo thus many tourists prefer tracking it to any other family in Virunga. The family was named after the lead Silver Back called Humba, a brother to Senkwekwe Silver Back who was executed on 22nd July 2007 by unidentified gunmen. Humba split from Rugendo (his father) in 1998. As of current, the Humba gorilla family comprises of 9 members and there is no current challenge in the group leadership hence chances of the family to split are less.

Munyaga gorilla family also resides in Bukima sector close to the town of Goma, and the family comprises of 7 gorillas with 2 silver backs. It was the last gorilla family to be found by rangers, in 2008. The family was led by Munyaga by then the Silver back and the dominant adult female is named Bilali. She was from the Rugendo group in 2004 and after she joined. She had two babies but they both died in infancy. At the same time, Munyaga also disappeared and currently the family is under the control of silver back Mawazo who lived with Buhanga until 1997, then joined Karatega, then went back to Buhanga in 1998 and then, a month later, he joined the Munyaga.

Kabirizi also known as ‘’King of the Virunga national park’’ is the leading silver Back in this family. Kabirizi is well known for protecting his family in that he once lost the upper and lower canine teeth during a fight with another gorilla. The Kabirizi gorilla family is found in Bukima sector of Virunga national park and is one of the most visited gorilla families having many members. The Kabirizi gorilla family derives its name from an ICCN director who died in an accident around 1990s.

The Kabirizi gorilla family was earlier known as Ndungutse gorilla family, this was the time the family was dominated by Ndungutse a gorilla that was assassinated in the cross fire between the Democratic republic of Congo army and the Rwandan rebels. Kabirizi, the silver Back, is well known as a father of many mountain gorillas in Virunga, he was also not born in habitation but was a wild gorilla until in 1998 when he came to head the family and the name Kabirizi was given to him. This family is composed of 34 gorillas including 2 silver Backs.

Bageni gorilla family is found in Bukima and Gatovu areas of Virunga National Park in DR Congo. The family was formed in January 2013 after Bageni the Silver Back split from his father’s family (Kabirizi family). Bageni moved away with 20 individuals including his mother ‘’Mapendo’’ and brothers and formed his own family called Bageni. Bageni gorilla family is headed by the Silver Back, Bageni, and is composed of 30 individuals including; 3 Silver Backs, 10 adult females, 1 sub-adult female, 1 sub-adult male, 7 Juveniles, and 8 babies.

Lulengo gorilla family comprises of 6 gorilla individuals and 1 Silver back, and the family is led by Lulengo himself and is found in Jomba near Bunagana (Congo-Uganda border). Lulengo was born into the Rugabo Family which was the first mountain gorilla family in the Mikeno Sector to be habituated. Formerly the group was called ‘’Musekura’’ but the Rangers changed his name to Lulengo in the memory of the technical director of Virunga National Park who was killed by a land mine. His father Rugabo also died violently when he was shot by poachers during the Great Lakes Refugee Crisis in 1994. After his death, the family was left in the hands of his sons Lulengo (Black back), Pili – Pili, Mareru and Nvuyekure (Juvenile).