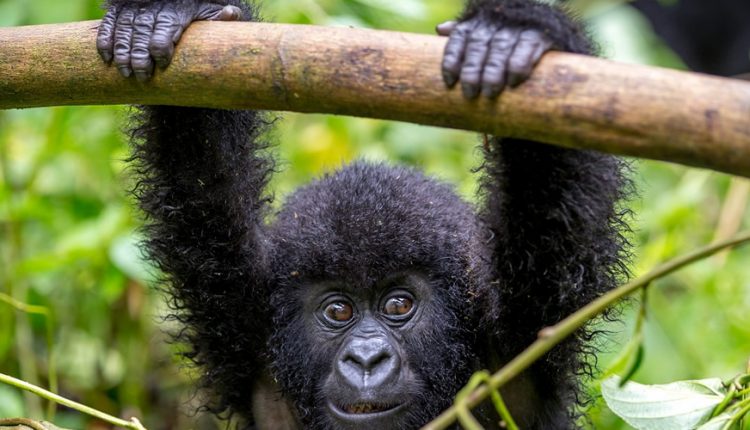 In Africa the unique, special and must visit attractions are the Gorillas which every visitor to Africa would wish to visit first before vacating the Land and plains of Africa, Gorillas are mostly found in the Western, Central and Eastern forests of Africa. In the Western part of Africa Gorillas are rarely seen which makes visitors leave but doubting the experience, Central and Eastern Part of Africa are the best places to go with 100% assurance of seeing both shy endangered Mountain and Lowland Gorillas in their habitats.

When I talk about gorillas you may ask yourself how does it look, Gorillas are herbivorous ground dwelling (feed only on ground) apes which feed on young bamboo shoot, stem, flowers, Sugar canes, tree leaves, foliage and some fruits which include Jack fruits, Mangoes, Avocado, Cabbages, Water melon, grapes, apples and more. Since they only feed on ground most of these fruits are just provided by human beings like park rangers because for them, they do not have capabilities of climbing trees to hunt for these fruits.

The commonest activity done is gorilla trekking which involves following established routes in a group leading you into the Jungle in search of these apes very excited and eager to see them playing with their young ones, feeding, laughing and taking some photos of them for memories.

Kahuzi Biega National Park. This popularly known destination is also located in Democratic Republic of Congo commonly known for the Lowland Gorillas; Kahuzi Biega National Park is Characterized with thick tropical rain forest, savannah grasslands, bamboo forests and some parts covered with Swamps where different bird species are sighted, trekking in the Jungle in search of these shy endangered Lowland Gorillas awards you opportunities of getting closer to nature where you sight different big tree species, thorns and hooks, different primates like Black & White Colobus Monkeys, Red tailed Monkeys, Blue Monkeys, Vervets, Reptiles which include black cobras, Python, Gabon Viper, Lizards and more. Lwiro Chimpanzee Sanctuary is another place to go while in Kahuzi Biega National Park and it was gazetted to protect the rescued orphaned Chimpanzees but the main activity done is Lowland gorilla trekking.