Welcome to the Virunga National Park a UNESCO World Heritage Site in the Eastern Democratic Republic of Congo on the border of Uganda and Rwanda. The park is Africa’s oldest national park and is also the continent’s most biologically diverse protected area. The park’s 7800 sq.km includes forest, Savannah, lava plains, swamps, erosion valleys, active volcanoes and the glaciated peaks of the Rwenzori Mountains. Virunga National Park is home to about a quarter of the world’s critically endangered mountain gorillas in Africa.

The park’s two other great ape species include the eastern lowland (Grauer’s gorillas and chimpanzees), make Virunga the only park in the world to host three taxa of great apes. Another prominent inhabitant of the park is the Okapi, an endangered species that resemble a zebra but is more closely related to the giraffe.

Virunga National Park is located in the Democratic Republic of Congo’s North Kivu province, and covers nearly 8,000 square miles. As well as being home to one of the world’s largest populations of the critically endangered mountain gorillas, it has hundreds of other rare species.

The park is comprised of three sectors:

The northern sector’s defining feature is the Rwenzori Mountains that border Uganda. At over 5000 meters (16,400 ft.), the summits of the Rwenzori’s are permanently snow-capped. Snow melt from the Rwenzori is one of the primary sources of the Nile River. Okapi’s can be found living along the Semuliki River valley below.

Lake Edward, the Ishasha River valley, and the Rwindi plains are the dominant geographical features that define the park’s central sector. Lake Edward contains over 50 species of fish, as well as numerous bird species. The Lake and the adjacent Ishasha River valley are home to the park’s recovering hippo population, once the world’s largest. The park’s highest concentrations of elephant, buffaloes, warthogs, and topi are found on the Rwindi plains of the central sector.

The Virunga’s southern sector is best known for the mountain gorillas that live on the flanks on the dormant Mikeno volcano (4380m/14,557 ft.). Dense forests cover most of southern Virunga, which also make it ideal habitat for chimpanzees and numerous species of monkey.

The history of the park affected the country, poaching depleted Virunga’s large mammal populations, infrastructure was destroyed and many rangers were killed, but thanks to the dedication of certain politicians, conservationists, park rangers and wardens, the park not only has survived, but is currently experiencing a dramatic renewal. The park was founded in 1925 by King Albert 1 of Belgium and originally known as Albert National Park, the first national park on the continent of Africa. It was founded primarily to protect the gorillas living in the forest of the Virunga Mountains controlled by the Belgian Congo, but later expanded north to include the Rwindi Plains, Lake Edward and the Rwenzori Mountain in the far north.

When the Belgians granted Congo independence in 1960 the new state deteriorated rapidly, in the process it was renamed Virunga National Park and the first Congolese Wildlife Authority was established now called ICCN. Foreign investment helped to improve the park’s infrastructure and training facilities and the park became a popular destination for tourists, receiving on average 6500 visitors a year. New tourist activities are being developed in the park, including the habituation of chimpanzees in the Tongo forest and high-end lodge conveniently located near the centre of the three main tourist attractions in the southern sector, north of north of Goma.

Straddling the borders of Rwanda, Uganda and the Democratic Republic of Congo, the Virunga’s are not a mountain range as such, but a chain of isolated freestanding volcanic cones strung along a fault line associated with the same geological process that formed the Rift Valley. Sometimes also referred to as the Birunga of Bufumbira Mountain, the chain comprises of six inactive and three active volcanoes, all of which exceed 3,000m in altitude from the tallest being Karismbi (4,507m), Mikeno (4,437m) and Muhabura (4,127m).

The names of the individual mountains in the Virunga chain reflect local perceptions. Sabyinyo translates as “old man’s teeth” in reference to the jagged rim of what is probably the most ancient and weathered of the eight volcanoes. Muhabura is “the guide”, and anecdotes collected by the first European to visit the area suggest that its perfect cone, topped today by a small crater lake, still glowed at night as recently as the early 19th century.

Gahinga is variously translated as meaning “pile of stones” or “the hoe”, the former a reference to its relatively small size, the latter to the breach on its flan. Of the other volcanoes that lie partially within Rwanda, Karismbi which occasionally sports a small cap of snow is named for the Crater Lake near its peak. The vegetation zones of the Virunga’s correspond closely to those of other large East African mountains forest below the 2,500m contour has been sacrificed to cultivation.

The most famous denizen of the Virunga’s is the mountain gorilla, which inhabits all six of the extinct or dormant volcanoes, but not for obvious reasons the more active ones. The Virunga also form the main stronghold for the endangered golden monkey, possibly the last one now that their only other confirmed haunt.

The Volcanoes National Park in Rwanda

The three national parks function separately today, but prior to 1960 the Rwandan and Congolese sectors were jointly managed as the Albert National Park. It is no surprise that visiting the mountain gorillas remains the most popular tourist activity in Volcanoes National Park. And since 2006, a total of 80 gorilla tracking permits have been available daily, eight for each twelve habituated troops. However, it would be reductive to bill Volcanoes National Park solely as a gorilla tracking destination. A wide variety of other hikes and activities are offered, making it possible to spend several days in Rwanda.

This is tucked away in the far south-west corner of Uganda, the tropical rain forest cloaks three dramatic extinct volcanoes and along with the contiguous Volcanoes National Park in Rwanda and Virunga National Park in the DRC Congo which together with Mgahinga form the 434 sq.km Virunga Conservation Area, this is the home of half the world’s mountain gorilla population. Gorilla tracking is still the main attraction here, but it is less popular than Bwindi Impenetrable Forest National Park due to the habituated family having a tendency to duck across the mountains into Rwanda or the DRC. But there is much more on offer here than gorillas and all activities are booked through the Uganda Wildlife Authority in Kampala or in Kisoro.

The Biodiversity of Virunga National Park

The Virunga National Park boasts an astounding biodiversity due to the large variety of habitats it offers. In the southern sector the mountain gorillas attract most attention but the montane forests are also home to other primates such as chimpanzees, Golden monkeys, Blue monkeys and black and white colobus monkeys, plus forest elephants and buffaloes are also found in this area as well as the shy golden cat.

The central area of the park consists mostly of savannah with species such as Lion, Leopard, Kob, Hyena, Topi, warthog among others. The Lake, once containing the largest population of Hippo’s, is now slowly regenerating after many troubled years and Hippo’s and Crocodiles are once again a common sight. In the North of the park in the deep Congolese forest the most elusive of African creatures is found: the Okapi.

Accessibility to the Park

There are only two routes that a tourist can access to reach Virunga National Park and these include; Via Uganda, cross the border in Bunagana, from where the Mountain gorilla trekking safari sites like Jomba and Bikenge are easily accessible within 1 hour. Then via Rwanda, cross the border at Gisenyi/Goma, the border crossing is easy if you pre – arranged your tourist visa via a local Congo tour company and if not it will be difficult or expensive. More so with your local tour operator the transportation is always done by the British Land Rovers and Toyota Land Cruisers that are fully maintained and serviced by the Virunga Foundation such they can hit the rough roads in the park. 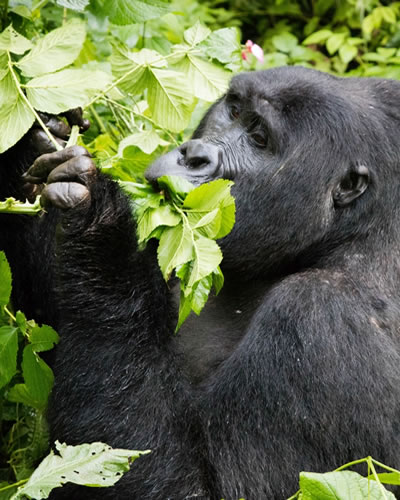 In the process of conserving mountain gorillas, the other subspecies of eastern lowland gorillas in Kahuzi Biega National Park, Bukavu in Democratic Republic of Congo have also received conservation attention and including other wildlife that share habitats with mountain gorillas which has made diversity of wildlife relevant besides gorillas in Central Africa.

Mount Nyiragongo is an active stratovolcano with an elevation of 3,470 metres in the Virunga Mountains associated with the Albertine Rift. It is located inside Virunga National Park, in the Democratic Republic of the Congo, about 20 km (12 mi) north of the town of Goma and Lake Kivu and just west of the border with Rwanda. Lava flows through down town of Goma and reaches Lake Kivu, only to 150 km depth. The most recent large eruption of Nyiragongo occurred in 2002 where 147 people killed. During this eruption lava flows moved through the city of Goma on the shores of Lake Kivu destroying 13% of the city and approximately 12,000 to 15,000 homes displaced hundreds of thousands of people. Therefore, if you are planning to visit Nyiragongo in Democratic Republic of Congo it is advisable to book and arrange all the logistics with the local reputable tour operators in Democratic Republic of Congo.

Where to Stay in Virunga National Park

Visiting Virunga National Park has become so much interesting and affordable due to several safari lodges and camps that have been put in place to accommodate tourists of all level. Before the park had only the Bukima Tented Camp and Mikeno Lodge and Congo gorilla safaris used to be expensive to travelers. But today many of them have been put in place and these include the Kibumba Tented Camp and this is much suitable for mid – budget travelers in Virunga National Park. More so for the honey moon travelers visiting Congo, the Virunga National Park the Tchegera Tented Camp is so much spacious and set at the shores of Lake Kivu and it is here also other adventure travelers can relax after the gorilla tours in Congo and the Nyiragongo hiking trek.

Virunga National Park being bordering with Uganda at the Ishasha sector end corner you find the wildlife and elephants, buffaloes, topi among others are spotted and the Virunga tourism department has come up to promote this sector and a nice exclusive Lulimbi Tented Camp is set just to the shores of River Ishasha.

Latest From Our Blog

admin Mar 28, 2022 0
Virunga National Park is Democratic Republic of Congo’s giant as far as its tourism and it’s ranked to be the…
Travel

admin Mar 2, 2022 0
Beyond a shadow of a doubt, trekking the endangered mountain gorillas is the major activity in the remarkable…
News

admin Jan 16, 2020 0
Virunga Foundation would like to wish you a very Merry Christmas and a happy New Year for 2020. When we opened…
Eco Tours Congo

admin Jan 16, 2020 0
Jomba Community Camp and Mountain Gorilla Trek is a new Congo gorilla journey that has been introduced by the…
News

admin Oct 24, 2019 0
Democratic Republic of Congo is where Virunga National Park is found, and the country is one of the only three…
Loading ... Load More Posts No More Posts